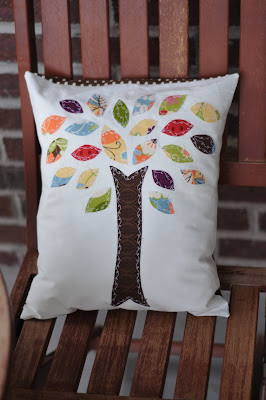 After making the front of the pillow, I had to trim the edges to determine the size of the final pillow. 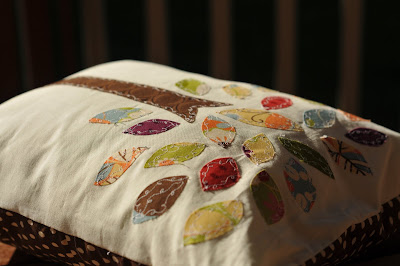 I took some scrap strips of fabric to make the back. I decided to do this one all of the same fabric, but I think it would look cute using different sized strips of a variety of fabrics for the envelope back. 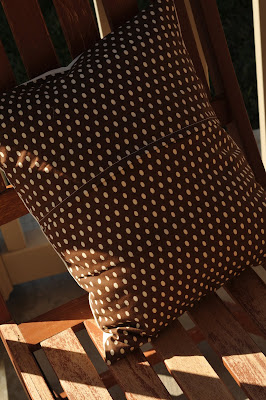 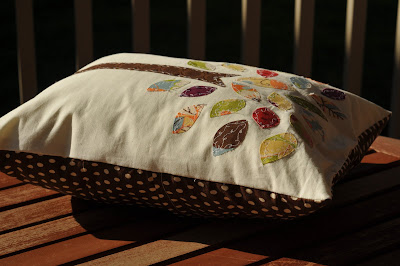 Before making the rainy day pillow last month, I probably never would have attempted to make my own pillow form. It just wouldn't have occurred to me. But then Kati showed some pillows she made at our Modern Quilt Guild meeting a couple months back and she totally opened my eyes to the possibilities of pillow forms. 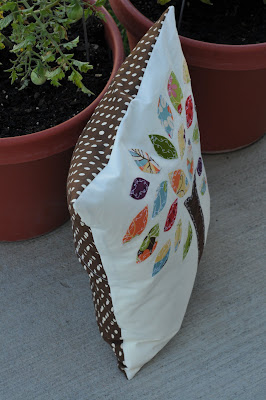 I took a pillow from my son's room that I didn't care for, ripped off the fabric cover, and used the stuffing for my new pillow. Closing the pillow form after it's been stuffed is always a challenge for me because of the puffiness of the pillow, so I think next time I'll just close it by hand with a needle and thread. 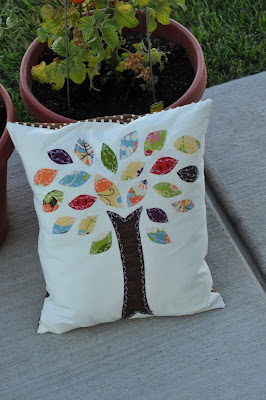 I plan to make more covers too. It'll be fun to make one for each month of the year, or at least for different seasons or holidays.

Now, head on over to AmyLouWho's for more show and tells.

And make sure to check out Quilt Story's Fabric Tuesday.

Very cute. It looks good with your tomatoes. too.

Cute pillow. I hate buying pillow forms (so expensive) so I usually have an old pillow or two around for just what you described.

That came out wonderfully!!

I love the pillow Brooke! It's darling! Have you been going to the MQG each month? I wish I didn't have another meeting that same night each month:(

Love it! I love the modern tree look and what a great idea to use up scraps!

this is beautiful...i love the tree and all the different fabrics for the leaves

Cute pillow! I really need to make one of these some day!

So so cute! I had never thought of making my own pillow forms. I love the feather ones from IKEA, that's what I use most of the time. But I just moved from an IKEA and there isn't one close by...

Brooke, looks like you have been up to some cute projects! We are starting a Tuesday Fabric linky party tomorrow and every tuesday. We were hoping you could link this project up tuesday (and regularly) Thanks!

So cute...I think I might try this one and instead of a pillow maybe frame it and hang it on the wall. Would that be ok? I will blog about it and definitely link back to you.

Thanks for linking Brooke, we would love any of your future projects too!

This is a gorgeous cushion!!