I'm so happy that Konda of Moose on the Porch Quilts asked me to participate in the blog tour for her new book, Simply Charming Minis. 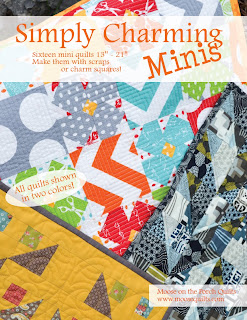 Back in 2010, when I first started quilting, I happened upon Konda's blog and saw that she was hosting a jellyroll sampler quilt-along. I thought this'd be the perfect opportunity for me to learn new skills. Remember, I was brand spankin' new to quilting at the time, and I learned so many techniques making each block. 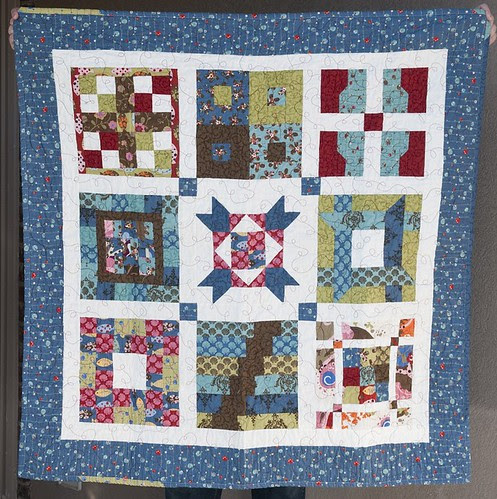 I ended up meeting Konda a couple months later at one of the Salt Lake Modern Quilt Guild meetings, and I was so impressed with her vast knowledge of all things quilting. (As a long-arm quilter, she even backed me up when I ranted about a quilt I had gotten professionally quilted that I wasn't too happy about. Thanks, Konda! Glad to know I wasn't off my rocker.)
About her new book: Simply Charming Minis is comprised of mini quilts made in traditional and modern colorways. I love how each quilt takes on an entirely different look just based on the fabric used. Here are a few images from the book so you can see what I'm talking about. 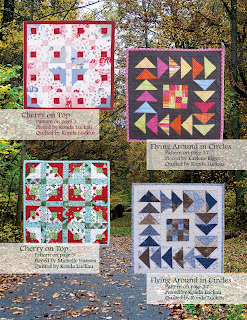 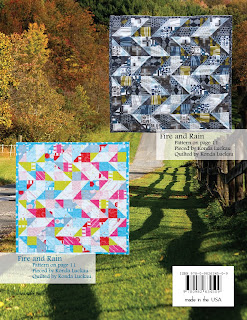 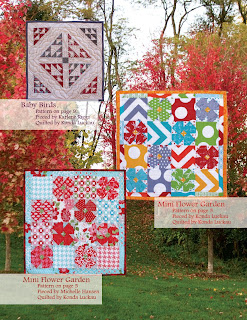 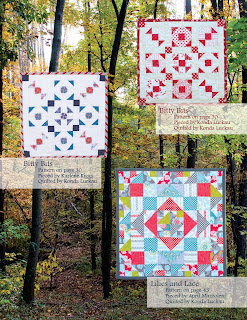 As a technical writer, I want my instructions clear and easy-to-understand. Konda has done a great job with this. You'll have no problems following her directions, even if you're a novice quilter.
In addition to the blog tour, Konda will be hosting a quilt-along based on the book. It will run from September 11 through April 2. We'll be making four quilt tops every two weeks and then taking a couple weeks in between each cycle to finish each quilt. Come April, you'll have 12 mini quilts. Konda will even have prizes along the way! 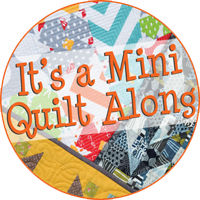 Now, if you'd like to win a copy of the book for yourself, leave me a comment on this post. It can be anything, but since my annivarsary is coming up (as well as my parents' 50th!), it'd be nice to get some ideas on fun and/or creative anniversary ideas (either for a gift or date). I'll draw a winner a week from today on August 3.
Be sure to visit the rest of the blogs on the blog tour.
Sat, July 28: Sherri McConnell at A Quilting Life
Sun, July 29: April Mazzoleni at Making Ends Meet
Mon, July 30: Vickie Eapen at Spun Sugar Quilt
Tues, July 31: Konda Luckau at Moose on the Porch Quilts and Michele Foster at Quilting Gallery

Friday was my sister's birthday, and I was so worried about making sure we had plans to celebrate it, I completely spaced buying her a gift! After talking it over with another sister the day before, we decided to get her gift cards to Michael's and Joann's since she's a crafty type too. But, of course, I didn't want to just give her the gift card in its little paper envelope, so I whipped up a little pouch in two of her favorite colors, black and red. 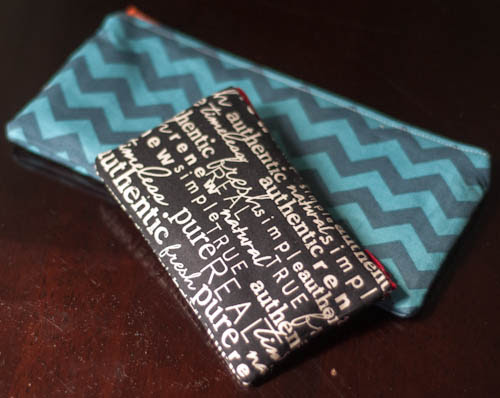 I did have the foresight to get her some washi tape, which happened to match the pouch perfectly! So now she can stick it to her heart's content.

And speaking of washi tape, Pick Your Plum (a website that hosts a daily deal of the crafty DIY variety) had a deal last week for a two-pack for $2.99. They're local too, so I don't have to pay for shipping.

While I was at it, I made a pouch for storing my English Paper Piecing (EPP) supplies - I've been totally obsessed with it, by the way. You can see a few shots of my current project on Instagram (I'm pitterputterstitch if you want to follow me). 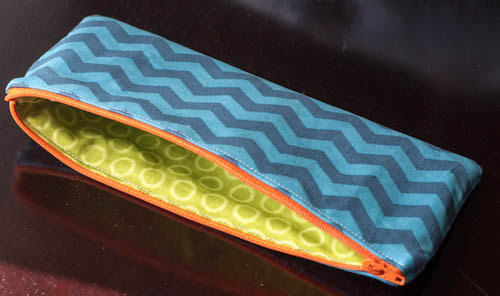 I've also been buying quite a bit of fabric lately; I can't help myself when I see people posting cute projects on Instagram. I find myself going in spurts of buying fabric and then not buying fabric. So in an effort to sort of quell my erratic purchasing behavior, I signed up for Pink Castle Fabrics' Stash Stack Club. If you're interested in building your stash one color at a time, you should head on over and check it out.

How are you all coming with your EZ Dresden Challenge entries?! Have you forgotten about it? There's only a little over a month left before you can link up your quilt on the Salt Lake Modern Quilt Guild's blog (September 1-6) for a chance to win an entire boatload of prizes. Refresh your memory by checking out the details here. For my color cog mini quilt tutorial, featuring the EZ Dresden ruler, click here.

My last little tidbit for tonight is to give you a heads up for a giveaway and book review coming on Friday, so head on back then to see how you can participate.

Back in June when I should have been working solely on my melon patch quilt (since the deadline was quickly approaching), I got distracted by all the pictures I was coming across of Lucy's Crab Shack on Flickr and Instagram.

This is what became of that distraction. I decided I needed a quilt to take with us to the beach. 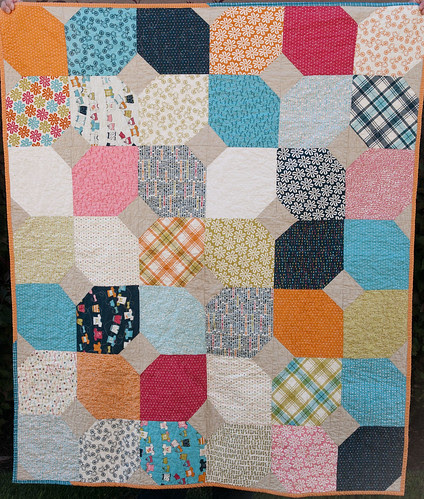 Sometimes a quick and easy piecing job works wonders when you're sewing curves or involved in another more complex piecing project.

To make the quilt, I took a layer cake (42 10" squares), cut 3" squares of some Essex Linen in natural, cut the squares on the diagonal, and pieced them to opposite corners of each layer cake square. I wasn't precise at all, just eyeballing the placement of triangles. I also opted to limit them to the two opposite corners rather than all of them because I wanted an x-look rather than a snowball-look.

For the back, I used a blue plaid from the Play Ball line from Riley Blake. I think it goes well with the Lucy's Crab Shack fabrics and it was on sale (score!). 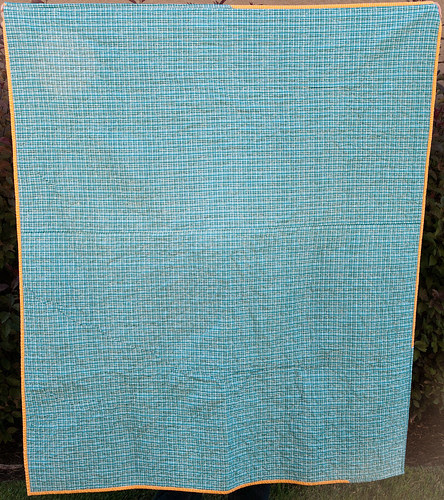 I used Patty Young's Running Stitch in Creamsicle and the plaid Play Ball print for the binding. I love her Running Stitch prints. They work so well as binding.

The quilt measures about 57x67 inches - the perfect size to warm up under while watching the fireworks at the beach! This was such a fun, quick finish. It reminded me that while I like taking the time to put a lot of work into a quilt, the quick and easy quilts can be satisfying too.

Wow. The summer has been going by so quickly. I haven't been around for the last month, but I've definitely been busy! Since I last posted, I finished two quilts and went with my family to Oregon for my BFF's wedding. We got back on Friday, decompressed for the weekend, and are recharged for a new work week tomorrow. Or as recharged as you can get having to start a new work week. =(

This is the quilt I made for Natalie and her new hubby, Ross. 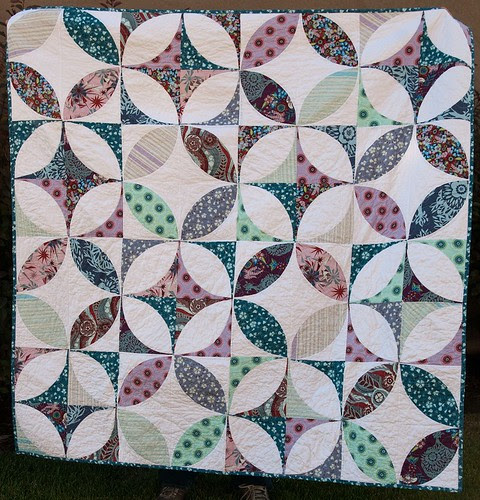 I used a fat quarter bundle of Anna Maria Horner's Innocent Crush in the potpourri colorway and Kona white to make this melon patch quilt.

If you remember, one of my quilt guild friends, Andrea, asked us to make melon patch blocks for her month in our local guild bee. 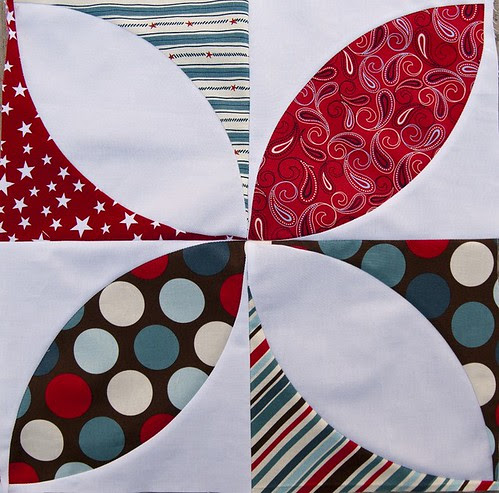 I loved it so much that I wanted to make an entire quilt out of it. Although, I opted to alter the composition a bit to make series of white blocks and series of colored blocks as opposed to alternating white and colored quadrants.

The quilt measures approximately 64 inches square. I quilted it in meandering loops, and machine-embroidered a label on the back to commemorate the day. 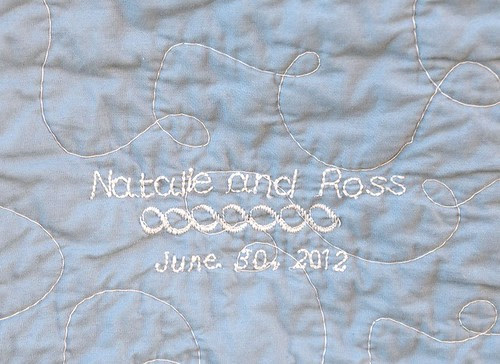 It's not perfect, but it works.

I made her open the quilt while I was there so I could see her reaction, and she didn't disappoint!

They bought a house a few months ago and so they held the wedding there. 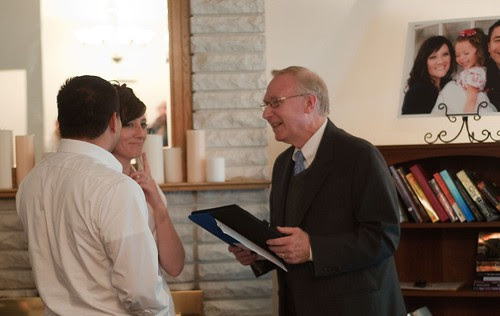 It was nice and cozy even if it rained a lot. (Isn't the picture of Natalie, Ross, and Ross' daughter in the upper corner so adorable?!)

We drove up to Oregon a couple of days before the wedding and spent some time sight-seeing. We visited Multnomah Falls on our way to Salem and had a good time hiking up to the falls. 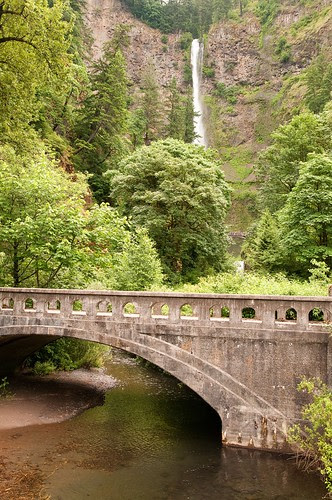 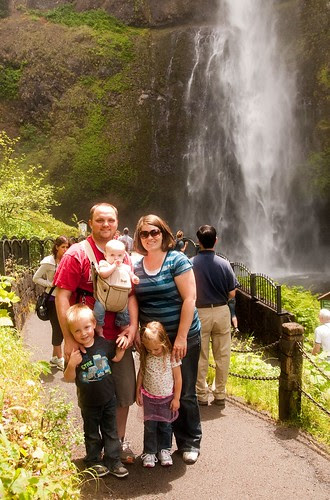 My sweet baby unfortunately had an ear infection and then woke up with a crazy rash the day of the wedding. She's still a cutie though and was a good sport despite not feeling well. 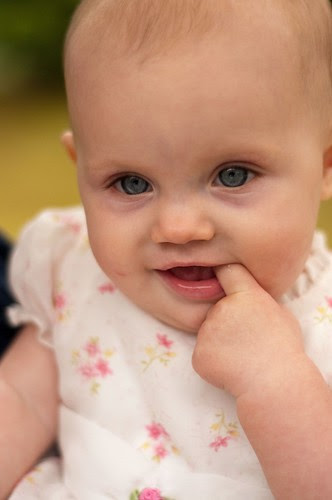 The day after the wedding, we left Salem and headed to Rockaway Beach on the coast where we rented a beach house for the rest of the week. My kids absolutely LOVED playing at the beach. I, however, do not love cleaning up sand several times a day. 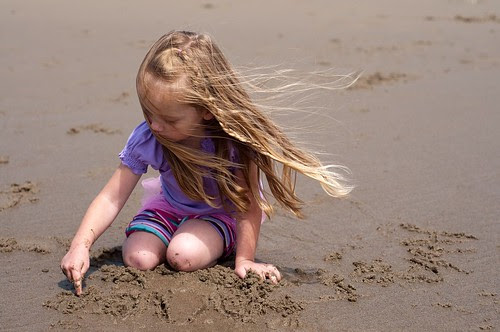 Over the next few days, we spent time exploring the coast. We visited the Peter Iredale shipwreck. My son is absolutely fearless. Here he is climbing on the shipwreck. Good thing he didn't cut himself on the rusty ship's frame. 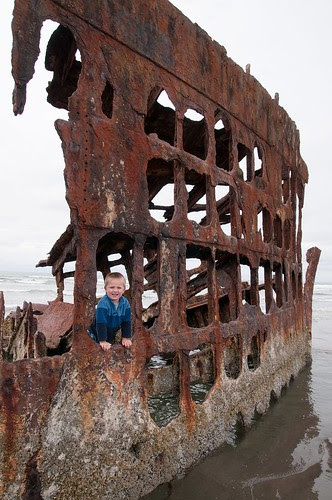 We also headed up to Astoria and climbed the Astoria Column, where I incidentally ran into a coworker who I didn't know would be in Oregon. Small world. 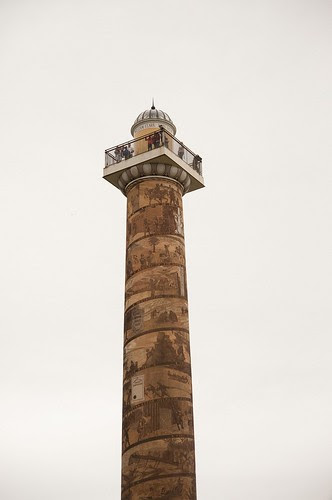 We tossed off a couple of balsa wood airplanes. My son would have climbed up and down the column all day if we had let him.

On the fourth of July, we drove out to the Cape Meares lighthouse near Tillamook. I've been to Oregon several times and I can never get over how absolutely gorgeous it is! The mister kept saying that we should move out there. If I could handle constant rain I could maybe consider it. 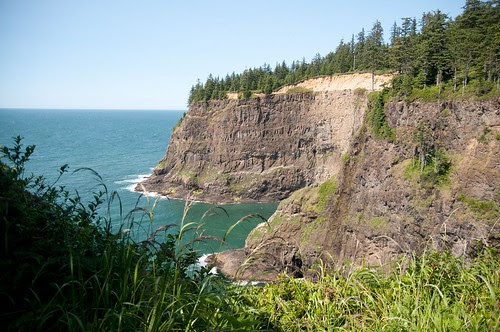 Throughout the trip, we did a lot of kid and baby carrying. Thank goodness my sister came with us and offered an extra set of hands so we weren't outnumbered. 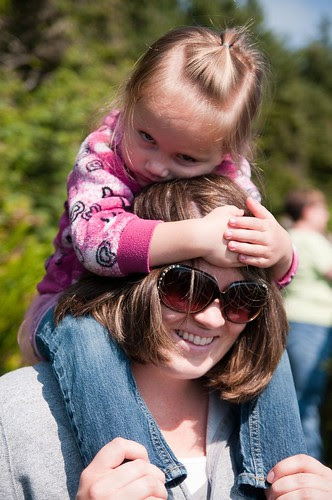 That night, we headed down to the beach to watch the fireworks. My three-year-old was pretty much terrified, but the rest of us had a good time. 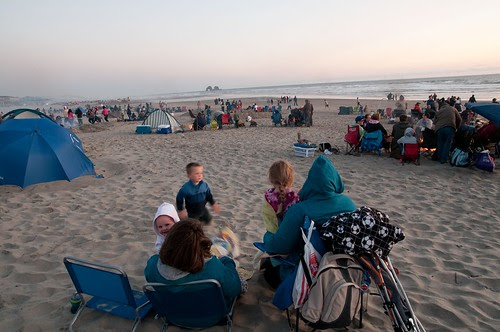 We headed to Boise the following morning and then the rest of the way to Utah the following day. We had a such a great time, but it was good to get back to our routines at home.

Later this week I'll be posting about the quilt I made for the beach, so stay tuned.