I was planning to schedule this post while I'm recovering from surgery in the next couple weeks, but the mister's aunt passed away unexpectedly this week - she was only 51 - so I think it's important to take time to say the important things in life. We miss you, Nancy. 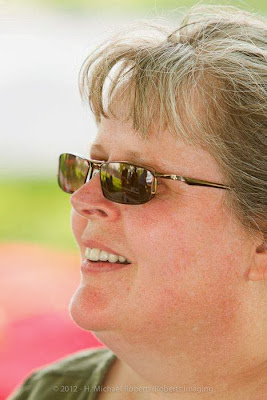 Earlier this month was my dad's birthday. My dad is pretty much the greatest guy ever. He's calm and level-headed and always tries to keep things peaceful. With five sisters and only one brother in the house that made for a lot of estrogen and all-around hormone overload growing up. Now that all of us are grown and most of us are away from home with our own families, my dad has tried to make a point to keep in contact on a regular basis. He calls to check in on each of us, which I really love and appreciate.

I don't remember when it started, but every time he calls and I answer the phone, he starts to sing Lionel Richie's song, "I just called to say, 'I love you.'" A few months after my youngest was born my dad got really sick and spent a week in the hospital. Things weren't the same after that. He's bed-ridden now and we've had a few scares that he was drifting away. For his birthday this year, I wanted to make him something to represent what his phone calls mean to me. I fussy cut this telephone from Melody Miller's Ruby Star Sparkle and appliqued it onto some of Joel Dewberry's Herringbone in Grass from his Modern Meadow line. Then I fused interfacing to some of Denyse Schmidt's Chicopee Cross Square in Green and cut out the letters for the lyrics. Then I appliqued them to the background fabric as well. I initially planned to make a pillow cover, but figured it would be better as a wall-hanging instead. I plan to make myself a pillow cover like it eventually too. It'll serve as a good reminder of love and family and making sure you take the time to tell those you love how you feel.
Posted by Brooke at 11:04 AM 4 comments: Links to this post

I finally got my computer back so now I can share this quilt finish with you.

One of my nephews is a huge football fan. He played all growing up and in high school and now he's in college. In trying to personalize a quilt for him, I used his favorite colors (orange, green, and purple) to put together this pixelated football quilt. I used the orange for the football, of course, and probably should have only used green in the background so it'd look like grass, but I didn't think of that until I had already pieced the top. I used an orange sheet for the backing that I picked up at Target or Walmart. To frame the quilt, I chose an orange binding from the Chicopee collection by Denyse Schmidt. I quilted a meandering stipple on the entire quilt. I've been trying to practice, but I think perhaps I should practice on small quilt sandwiches until I get a better handle on it. It's not terrible, but I don't think it looks great yet. My computer has been in the shop for nearly two weeks now and it’s driving me a little batty! So that means that you’ll have to endure cell phone pictures of my WIPs this week.


My baby turned two this past weekend. She’s officially exited the baby stage and is in full-on toddler mode. I have mixed emotions about it because I’m pretty sure she’s going to be my last child. Anyway, for her birthday, I made her a #geranium tunic using Made by Rae’s pattern. And I think it turned out pretty stinkin’ cute! There are definitely things I need to do better next time (like pay attention to where my 3/8” seam line is on my machine – I used the 5/8” line when sewing the bodice, but it still fits!), but I was really pleased with how it turned out. 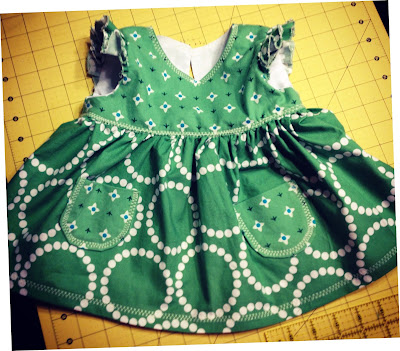 Instead of using one print, I used two Lizzy House prints, a Hello Pilgrim flower print and some green Pearl Bracelets. 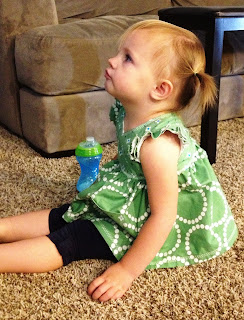 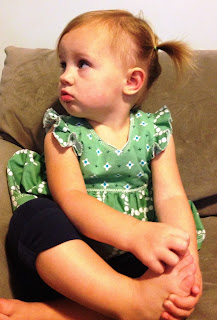 I still need to add the buttons to the back, so I'm hoping I don't put that off too long.

It was my dad's birthday last week too. Every time he calls me on the phone, he sings, "I just called to say 'I love you'" by Lionel Richie. So for his birthday, I made him this wall-hanging. Eventually, I'll make myself a pillow like it too. 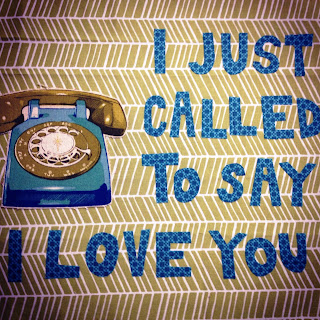 In progress this week

I'm having wrist and elbow surgery in a few weeks so I'm trying to get this next project crossed off my list ASAP before I lose the use of my arm for six weeks. 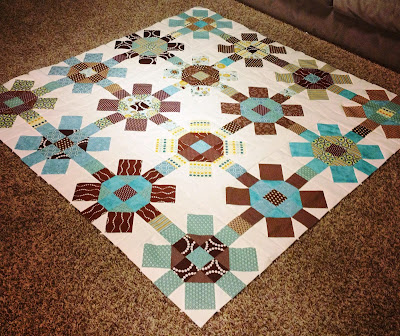 I used Red Pepper Quilts' Labyrinth pattern to make this brown and blue quilt top. I plan to add another outer border to finish it off. I really like the color combo. Brown isn't usually a color that I use much in quilts, but I like how it pairs with the blue here. The top came together pretty quickly too. I'll definitely be making another one in the future.

Posted by Brooke at 6:00 AM 5 comments: Links to this post